Join us in the CattleTrack Gallery for a stimulating hour with creative and innovative members of our community. Presenters/performers will share their expertise and engage in lively conversation with the audience.

What better way to celebrate Valentines Day than hearing Bob Boze Bell and Jana Bommersbach talk about their latest book Hellraisers & Trailblazers: The Real Women of the Wild West. Hear about the gutsy women, fearless women, smart women, stubborn women, and inspiring women of the American West. You will also have the opportunity to purchase a copy of the book and have it signed by the authors.

The Real Women of the Wild West

ABOUT THE BOOK
We know all about the bandits and bad boys, the gunfighters and goons, but not the women who held it all together with grit and spit. The reality is plain: there never would have been a settled West without the women—Native and Mexican women here first; Black and White women who followed—all settling the vast, unknown and scary lands beyond the Mississippi River. But they’ve never gotten their due. If they’re mentioned at all, it’s as whores or tough-living Calamity Janes.

Here’s the good news: You don’t have to dig deep to find remarkable stories of the remarkable women of the West—you just have to care enough to dig. We cared enough. Meet some of the women who should be in every history book.                        —Jana Bommersbach

I agree with my longtime friend and coauthor, Jana Bommersbach, that the tough-living bad girls have gotten too much attention in the past, and I believe she’s absolutely right about the importance of including some newfound worthy women. And she has found plenty! Still, I knew we had to cover the bad girls and the wild women as well, so we’ve included both, to put them in context to each other and hopefully bridge the gap between the two. We both agree on one thing: “Well-behaved women seldom make history.”
—Bob Boze

ABOUT THE AUTHORS
Jana Bommersbach and Bob Boze Bell first worked together and shared an office in The San Carlos Hotel (2nd floor) when they worked for New Times Weekly way back in 1978. They have been friends ever since, and when Bell bought True West magazine in 1999, one of his first hires was Jana who has covered the Saviors of the Old West waterfront for two decades. They teamed up on this book three years ago and actually survived working together on a project they both feel passionate about. They will discuss their rough sledding and their many frustrations and delights. 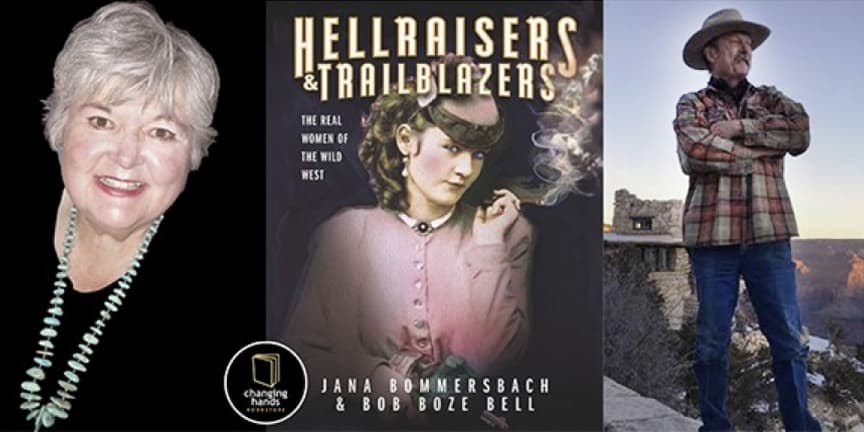 CattleTrack Arts and Preservation supports local artists, craftsmen, and students in our commitment to preserving Scottsdale’s unique cultural heritage. We look forward to seeing the CattleTrack family for this 2023-24 season of CattleTrack Talks.

We would love to hear what’s on your mind.
Need more info on an upcoming event? Interested in a tour or possible renting the Gallery for a private function? Whatever the question or comment, here is the spot, just drop us a note.

Cattle Track Arts and Preservation is a 501C3 (non-profit).

Our mission statement:
To recognize and celebrate Scottsdale’s authentic cultural heritage by providing opportunities for artists, craftsmen and students, visual and performing, individually and collectively, to encourage and enhance their art forms and to further the preservation of Scottsdale’s genuine past as a unique arts community in a desert environment.

The “I WANT TO DONATE” button will forward you to Paypal for processing.