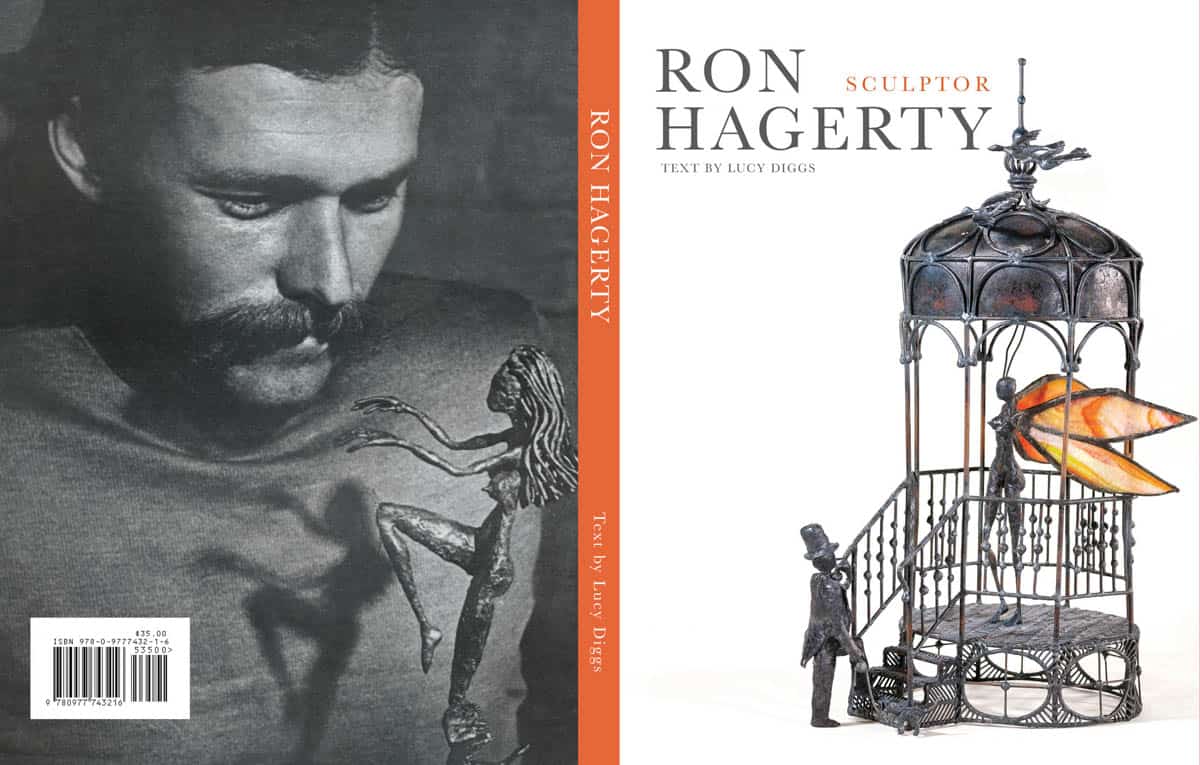 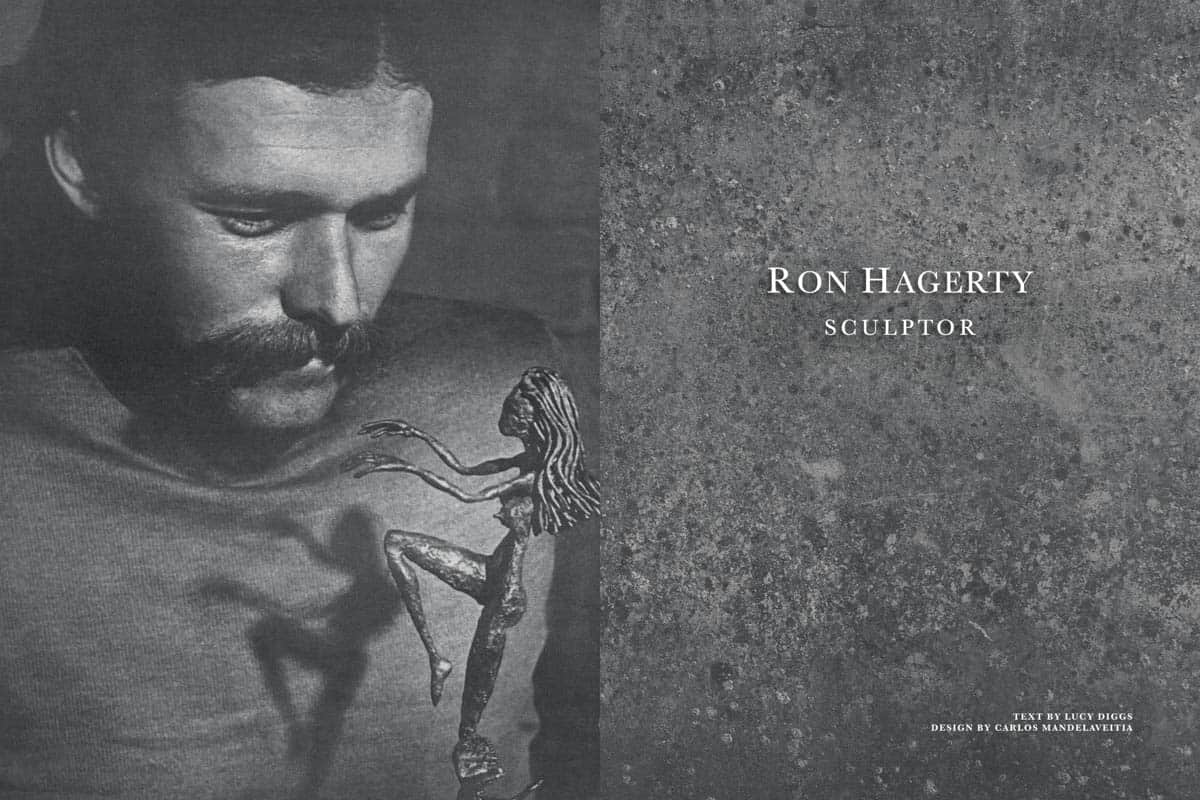 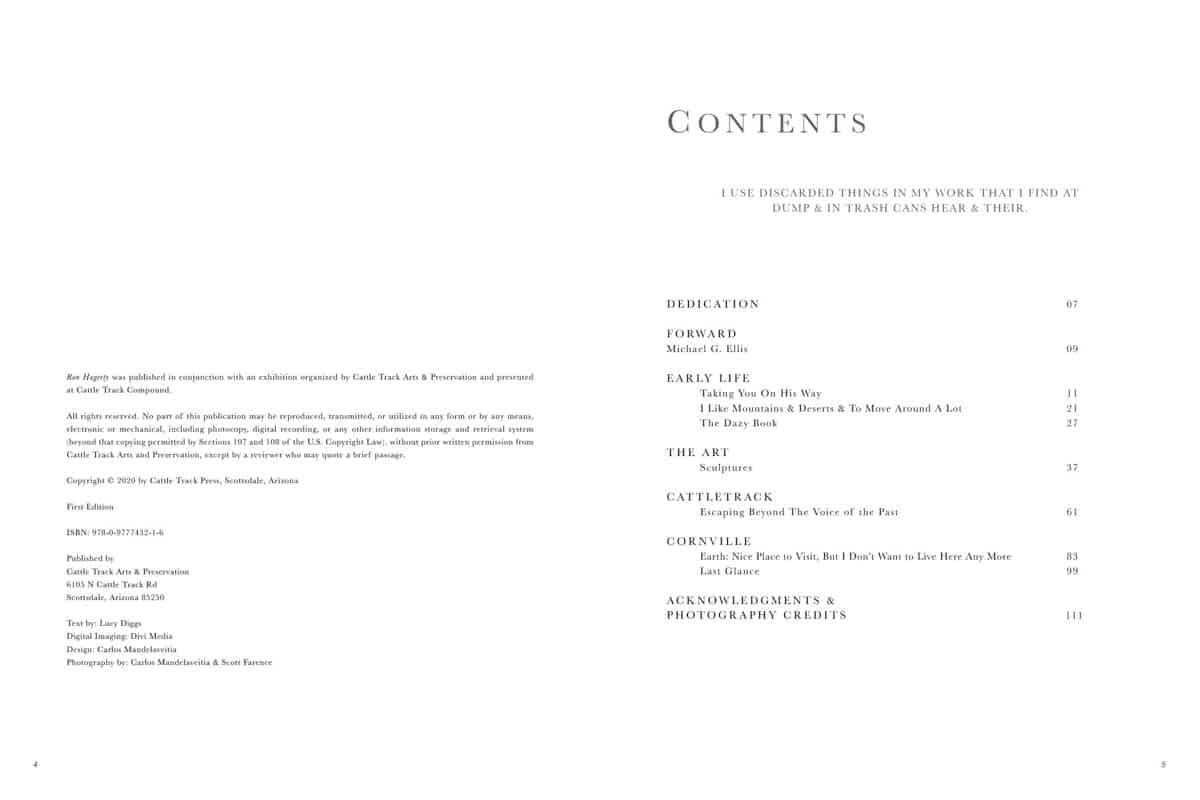 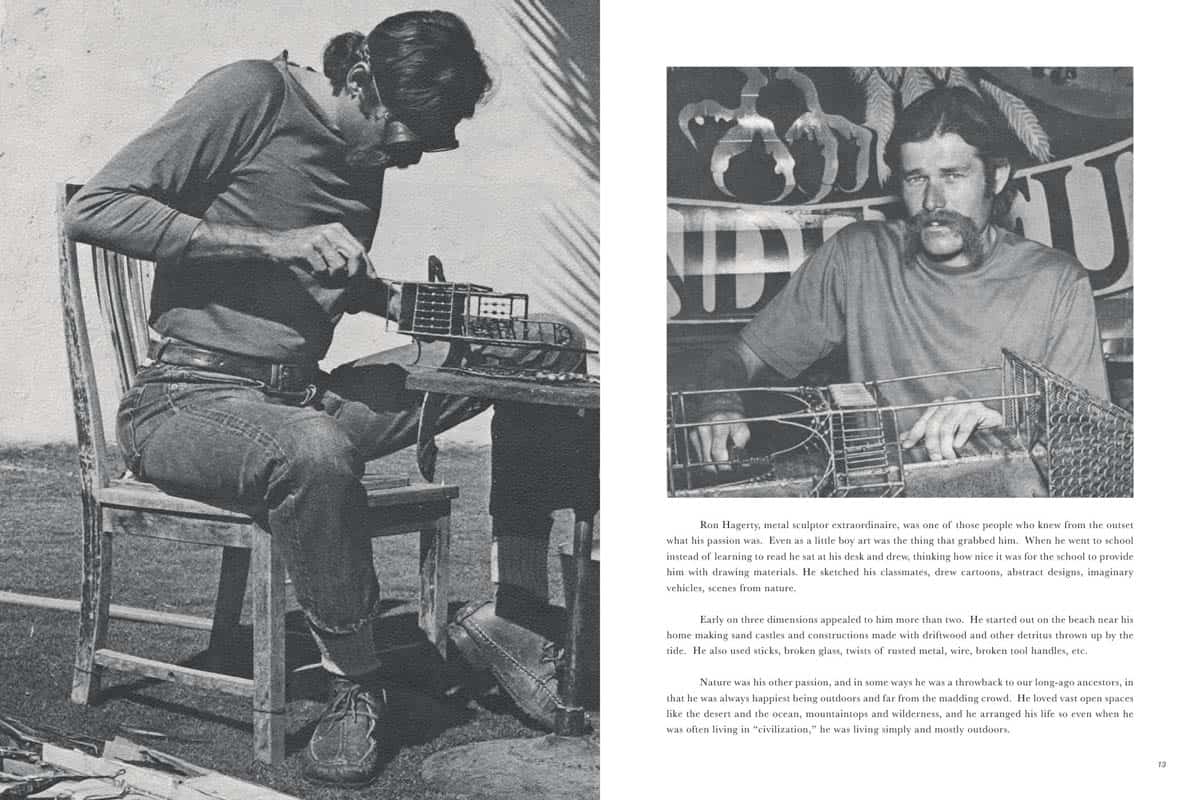 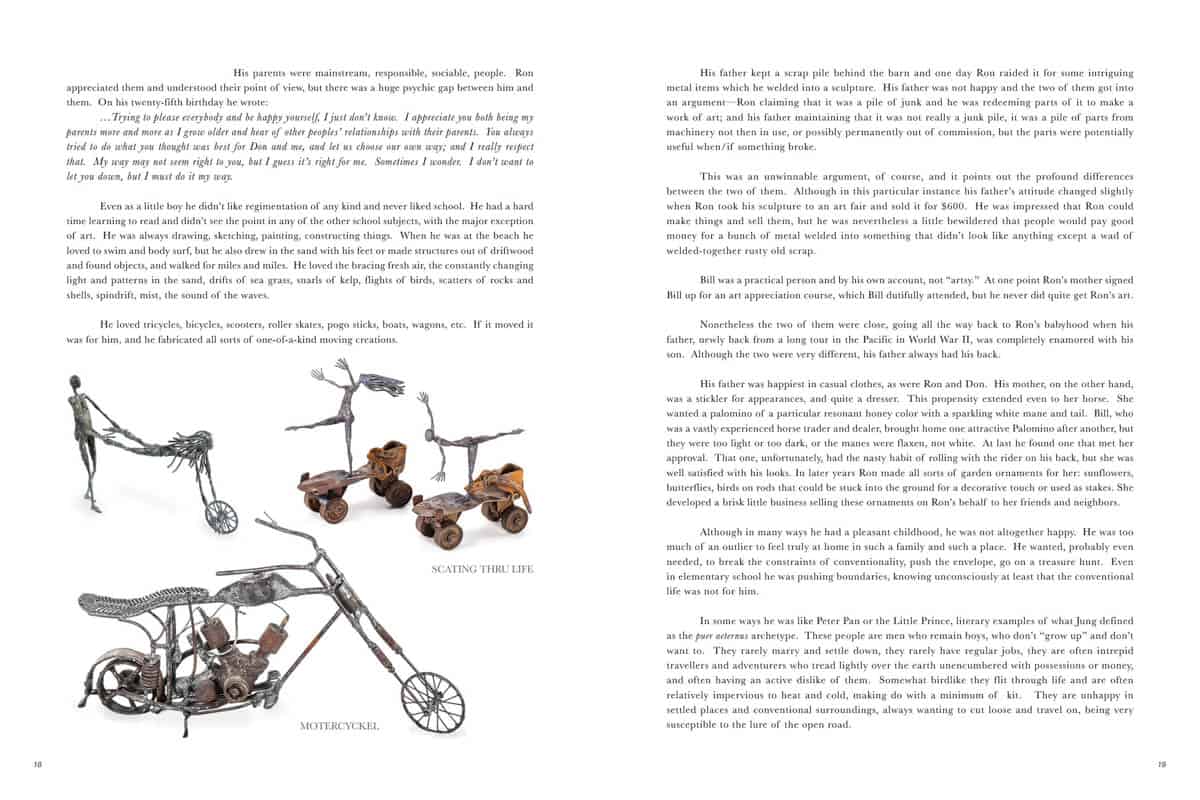 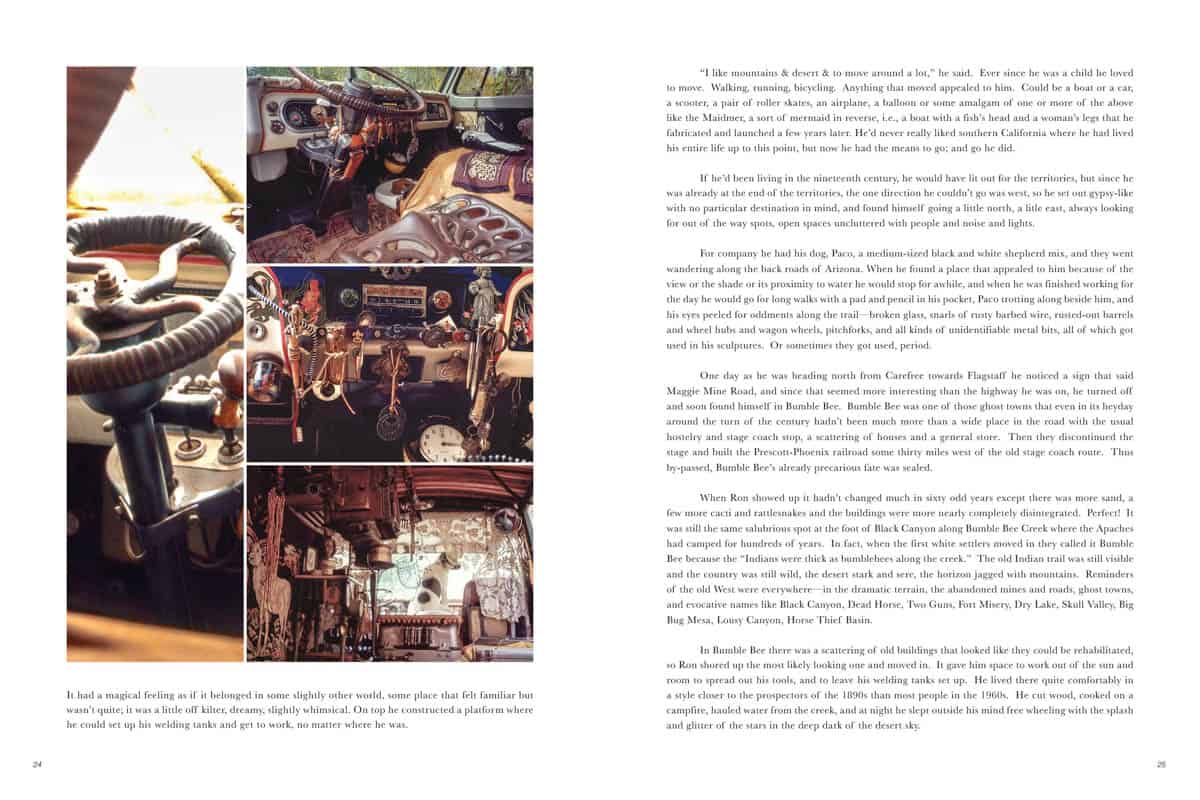 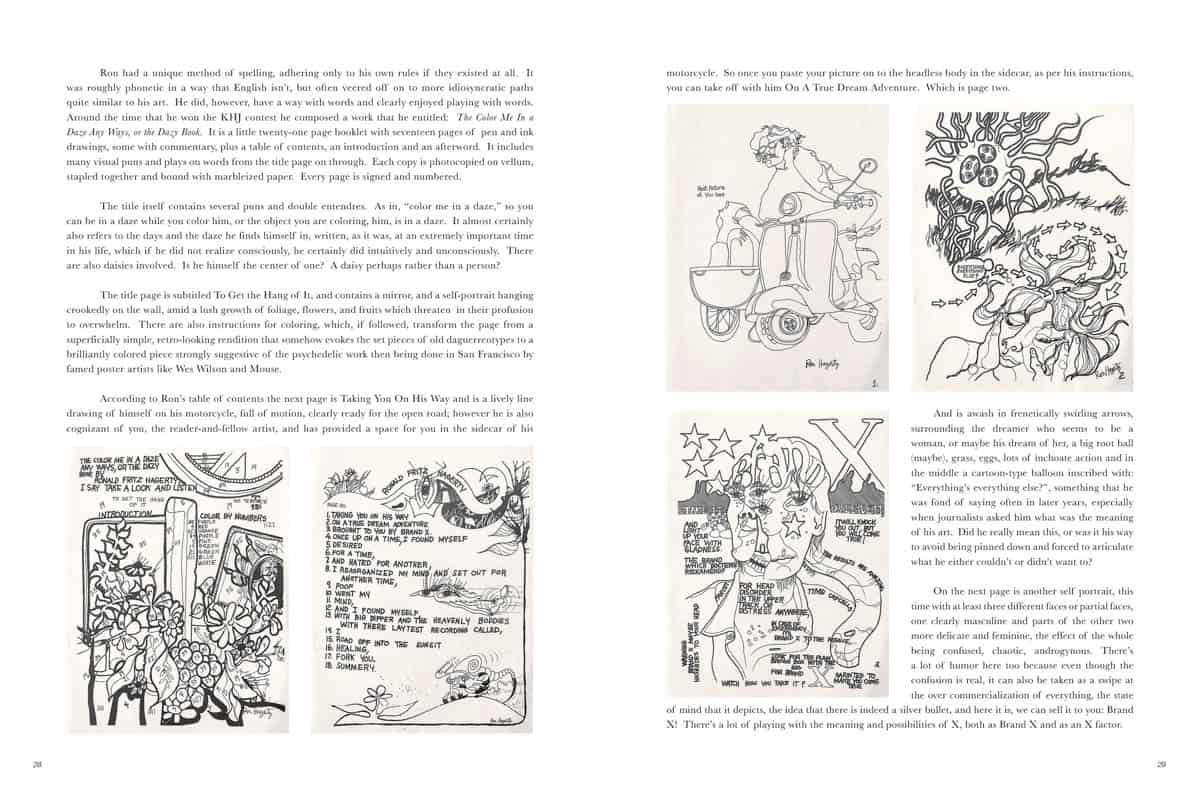 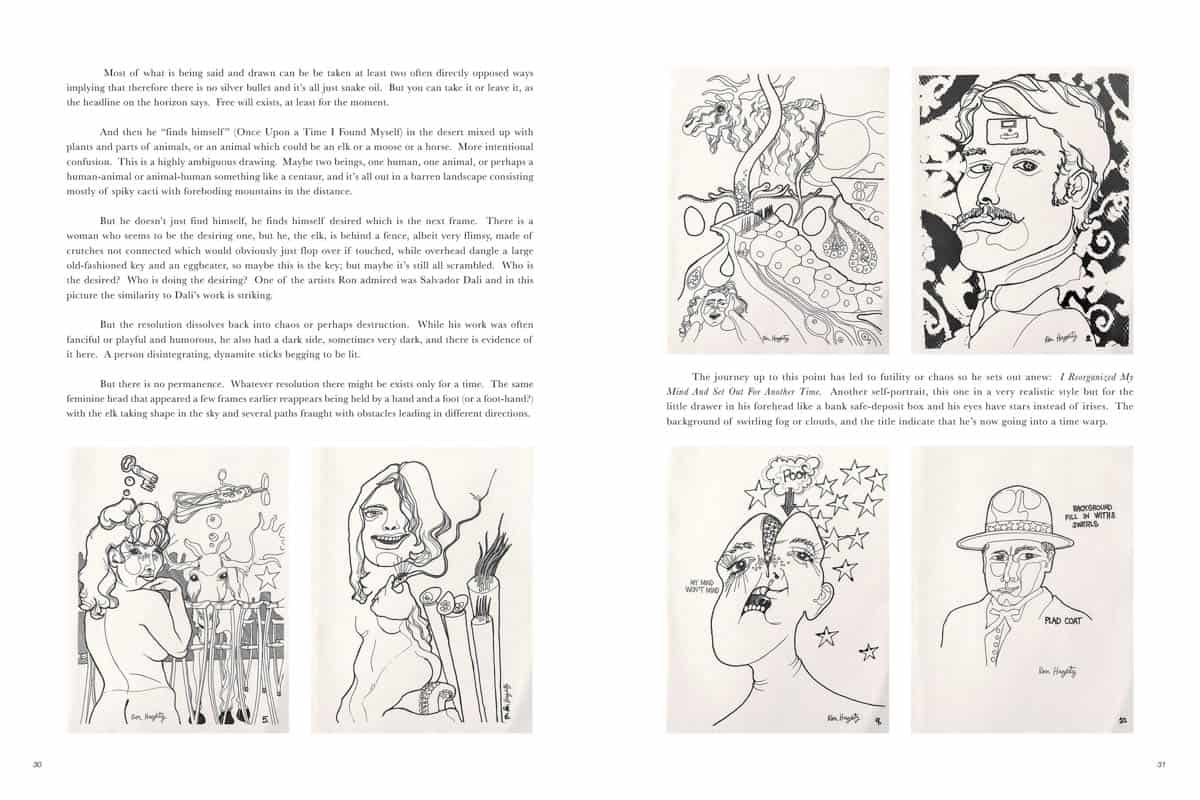 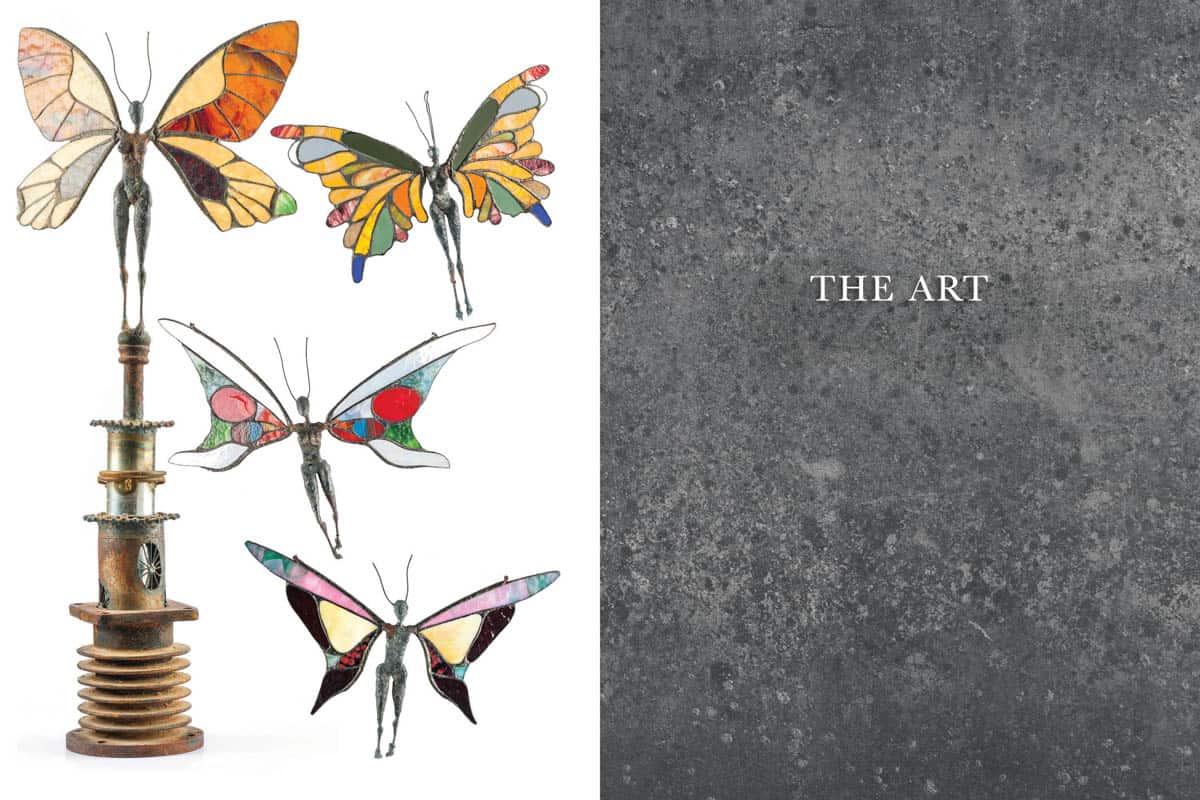 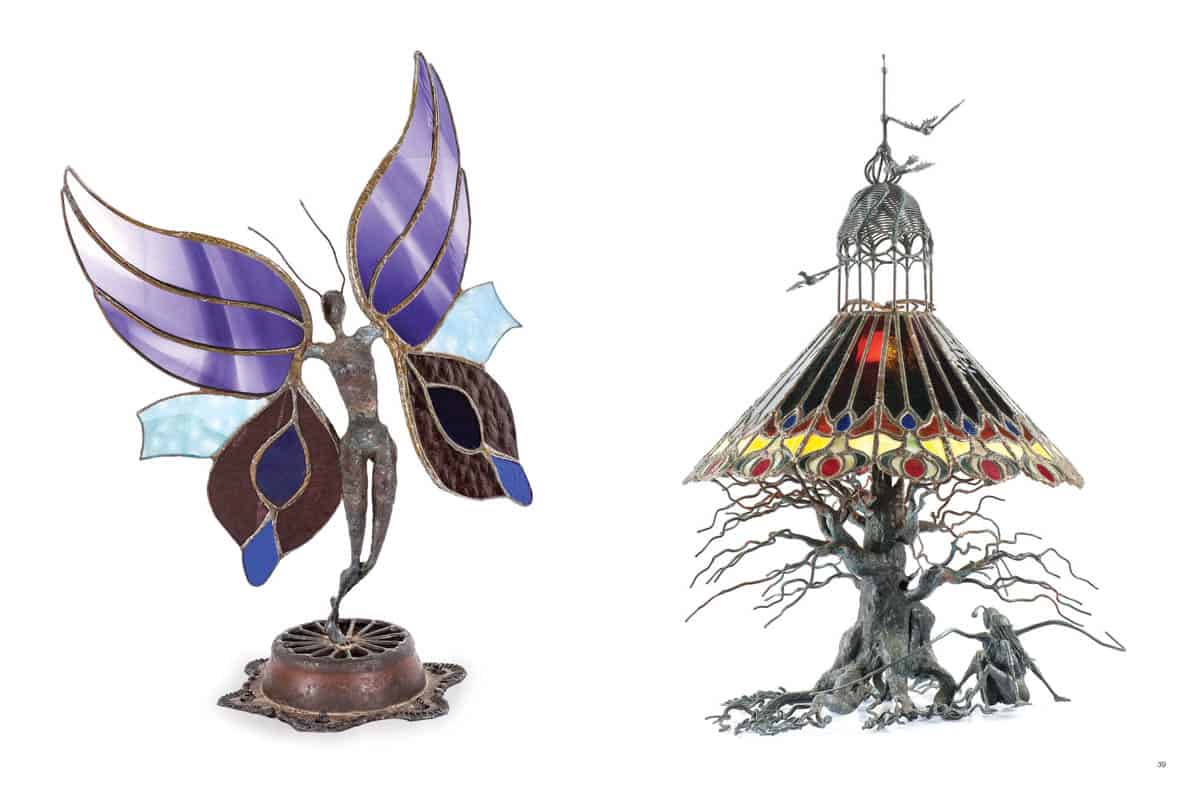 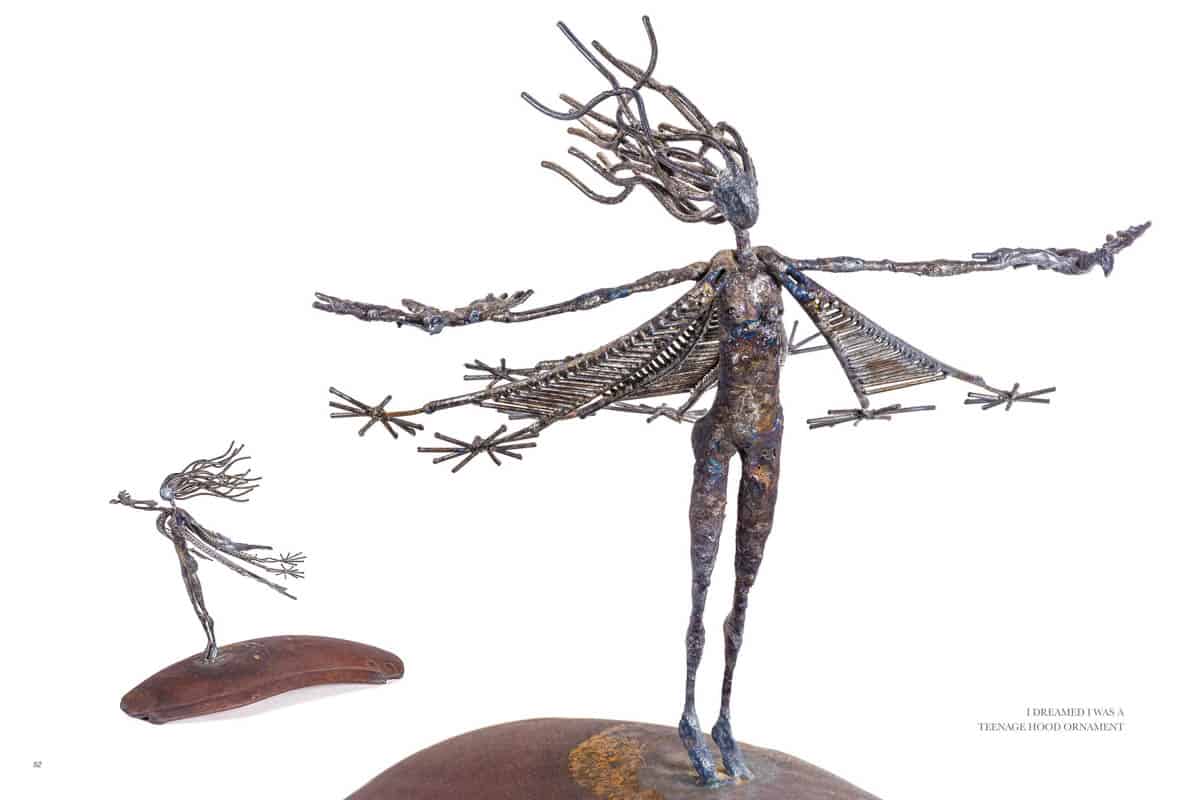 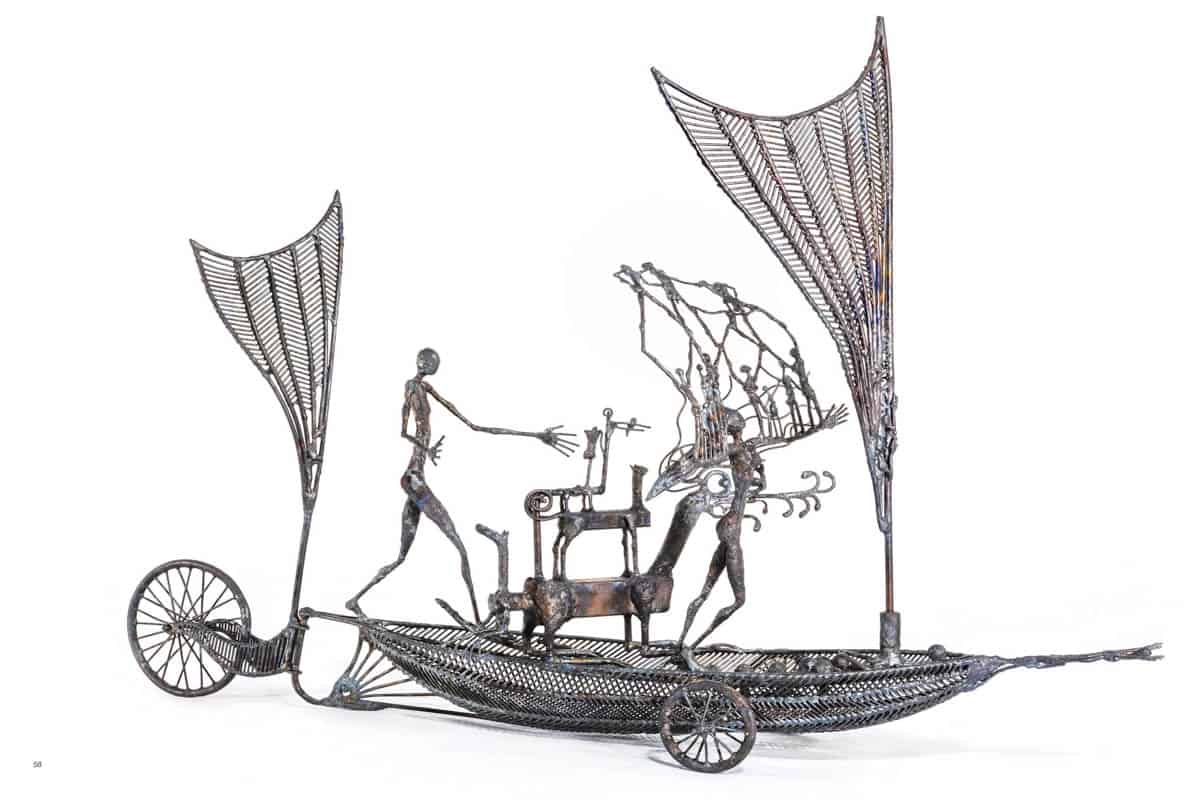 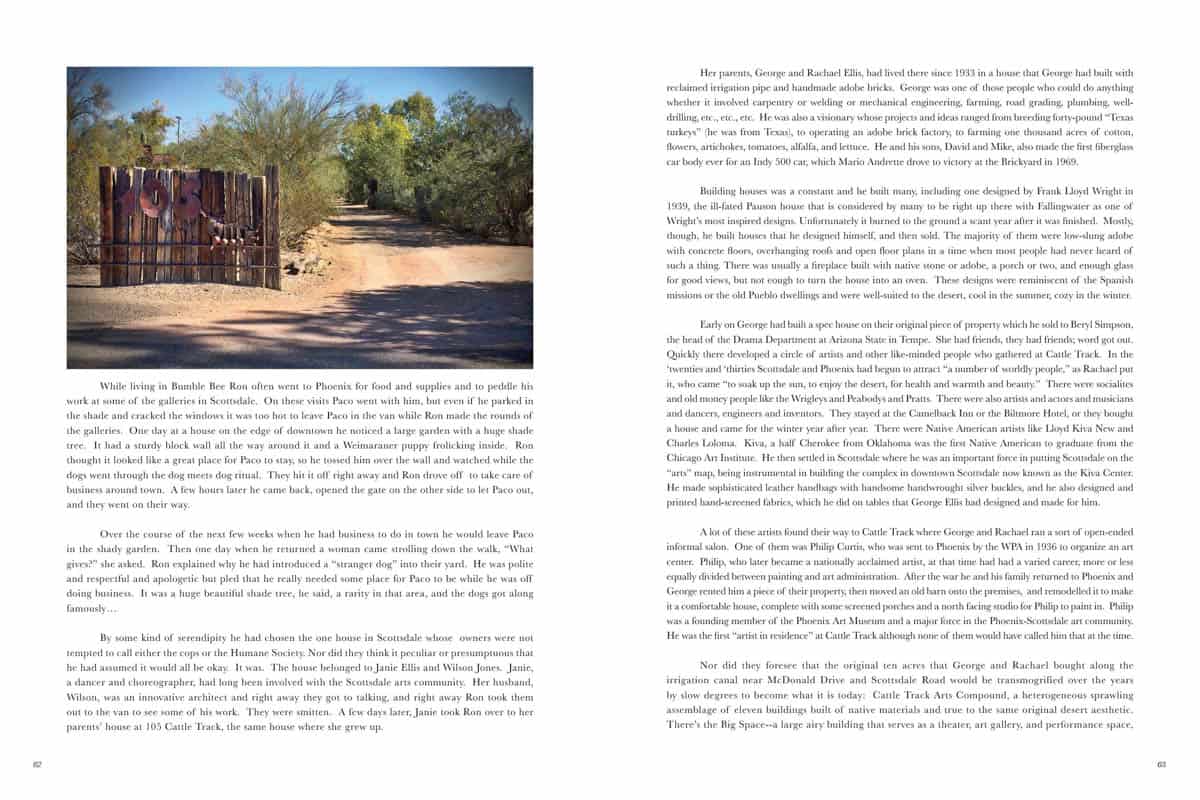 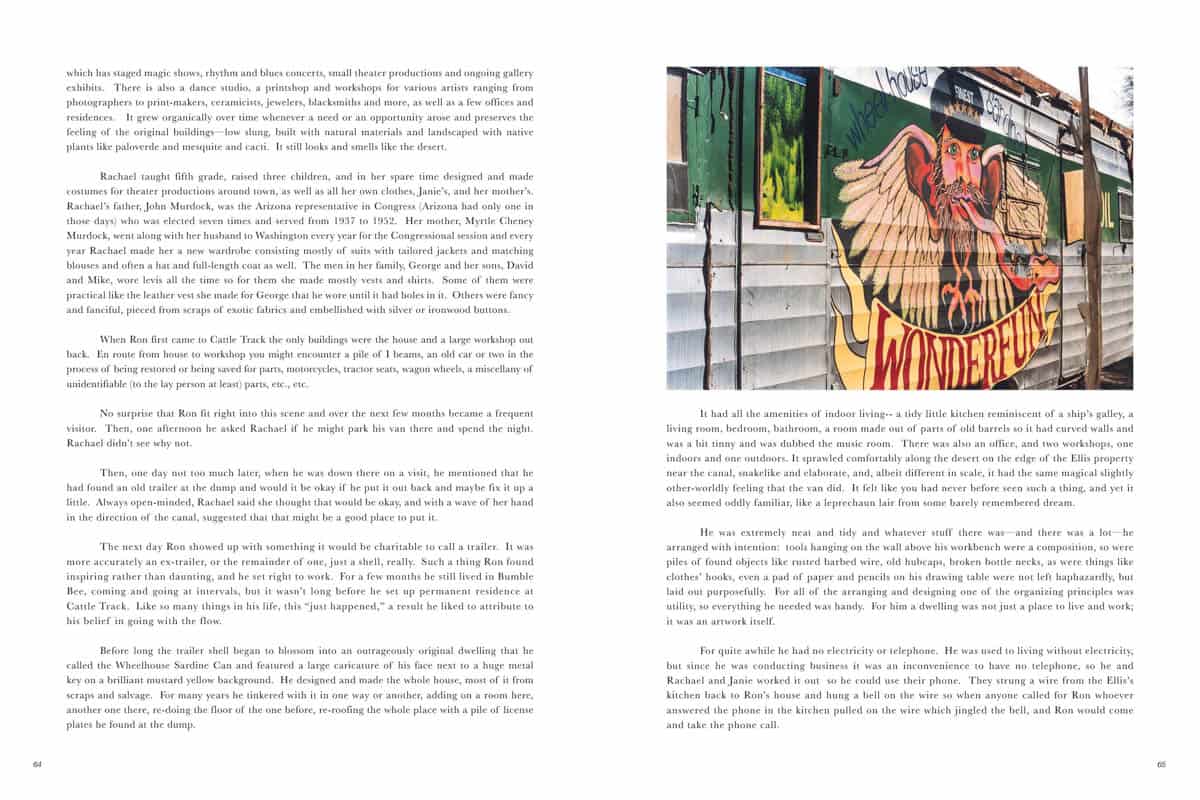 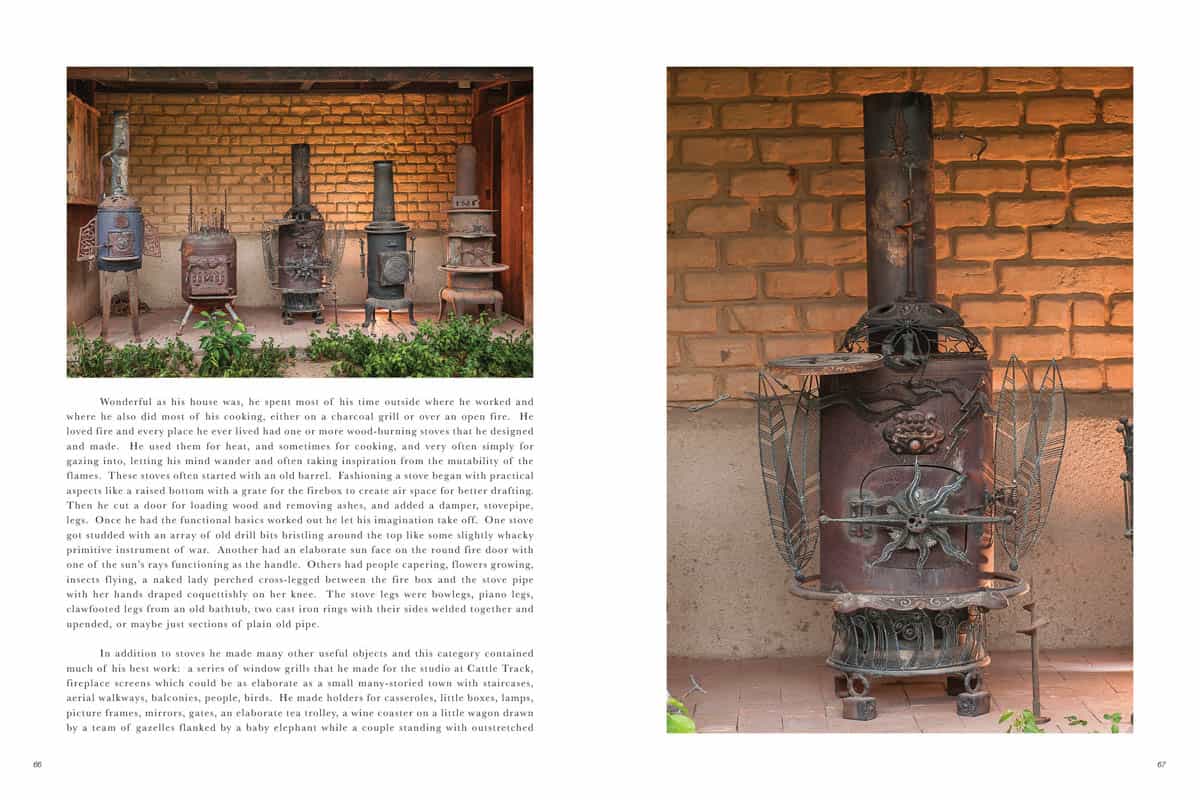 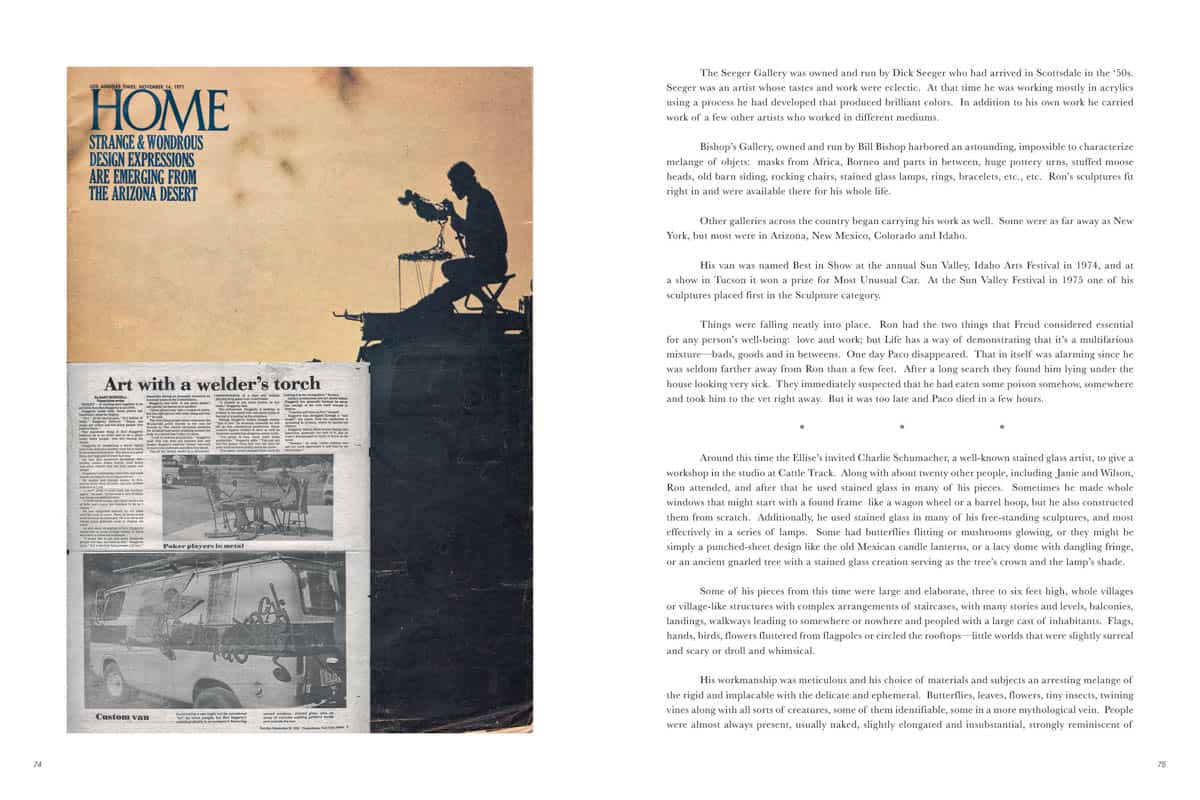 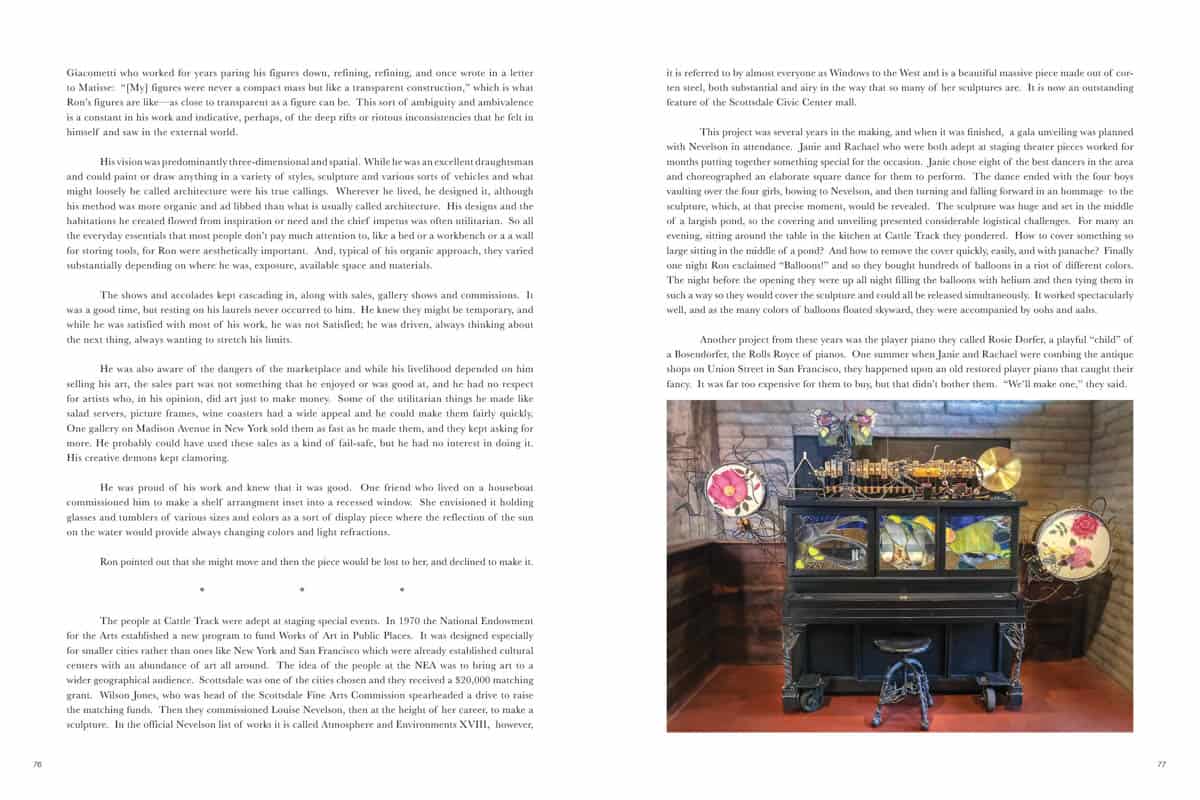 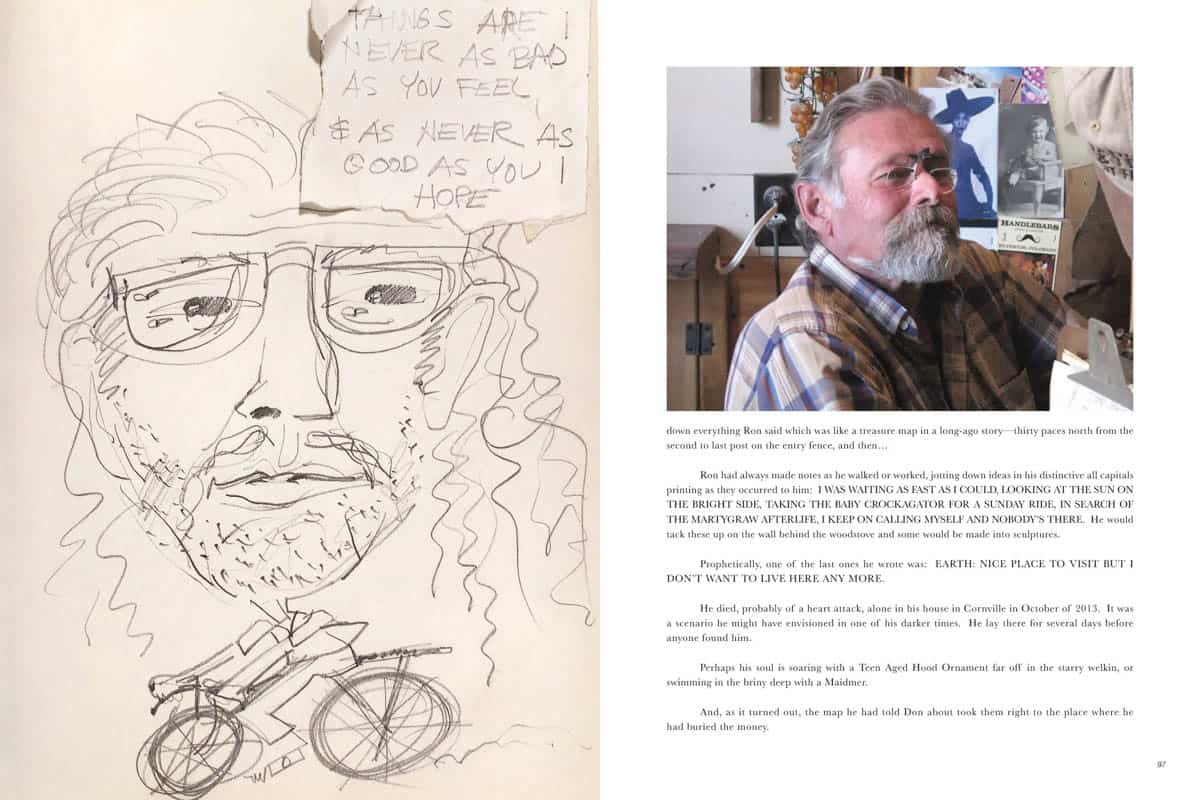 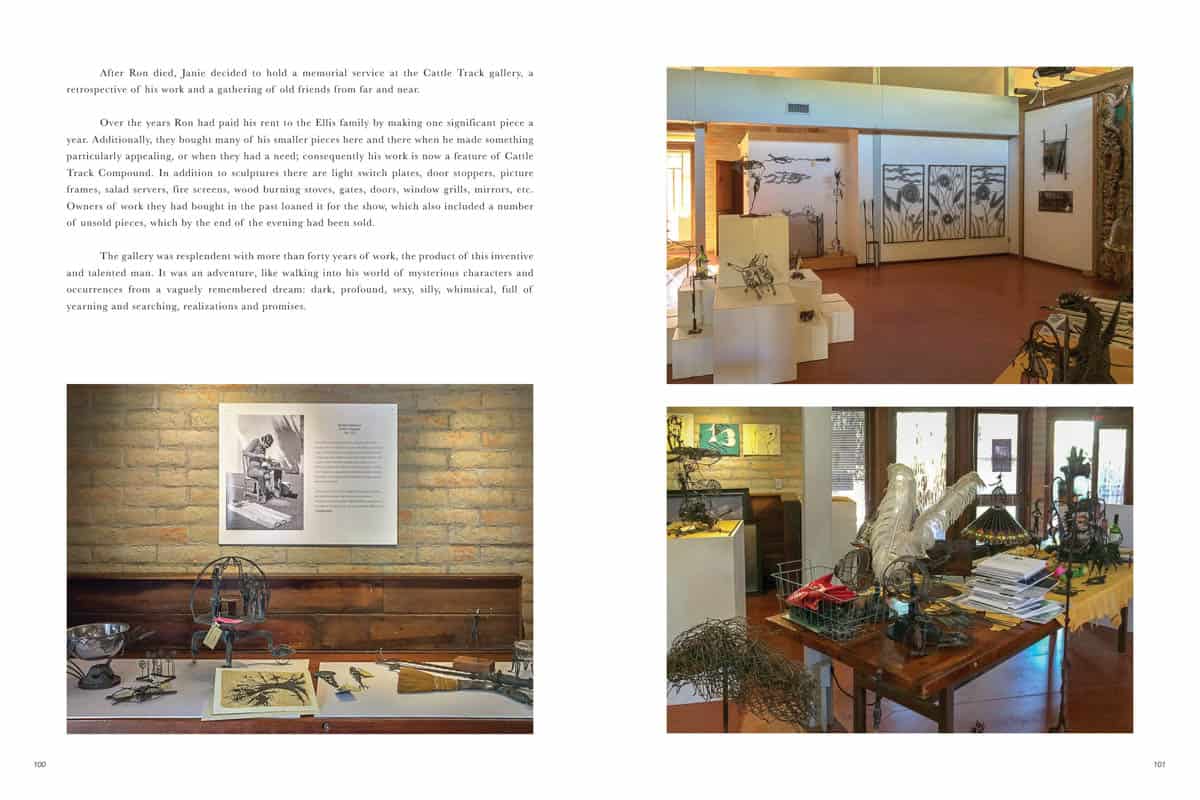 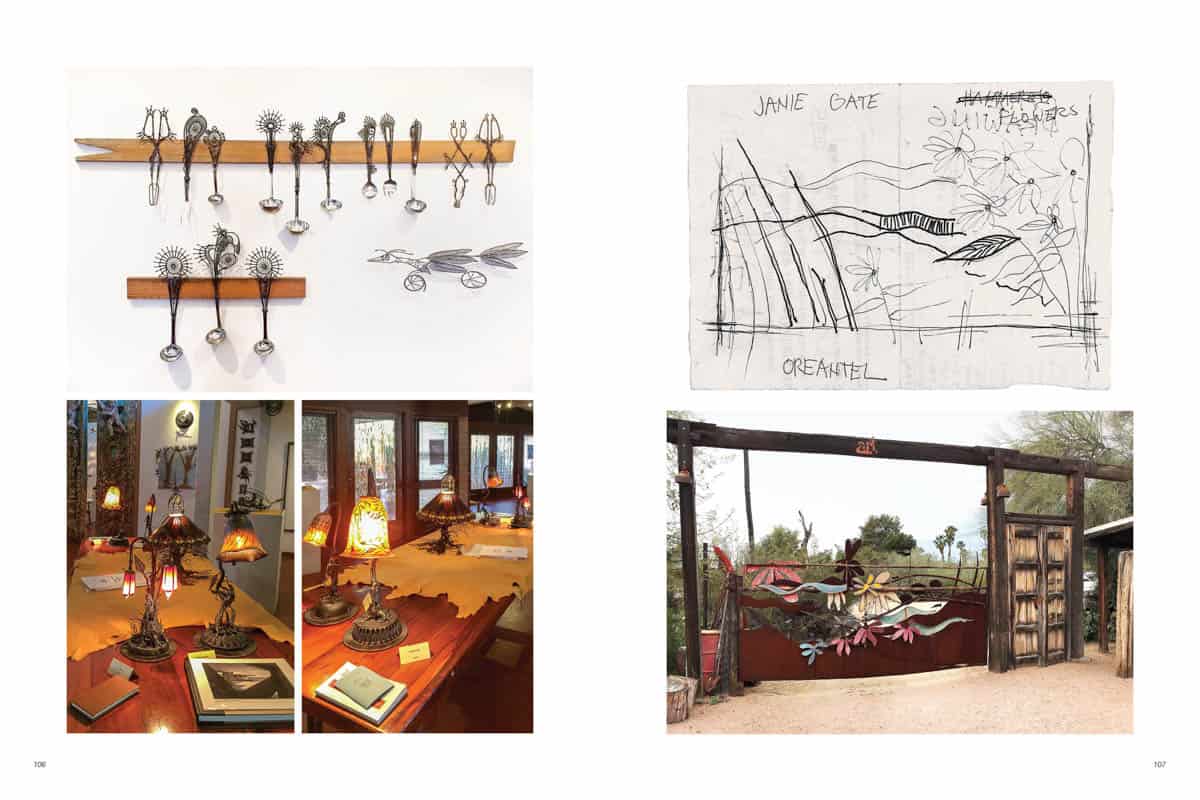 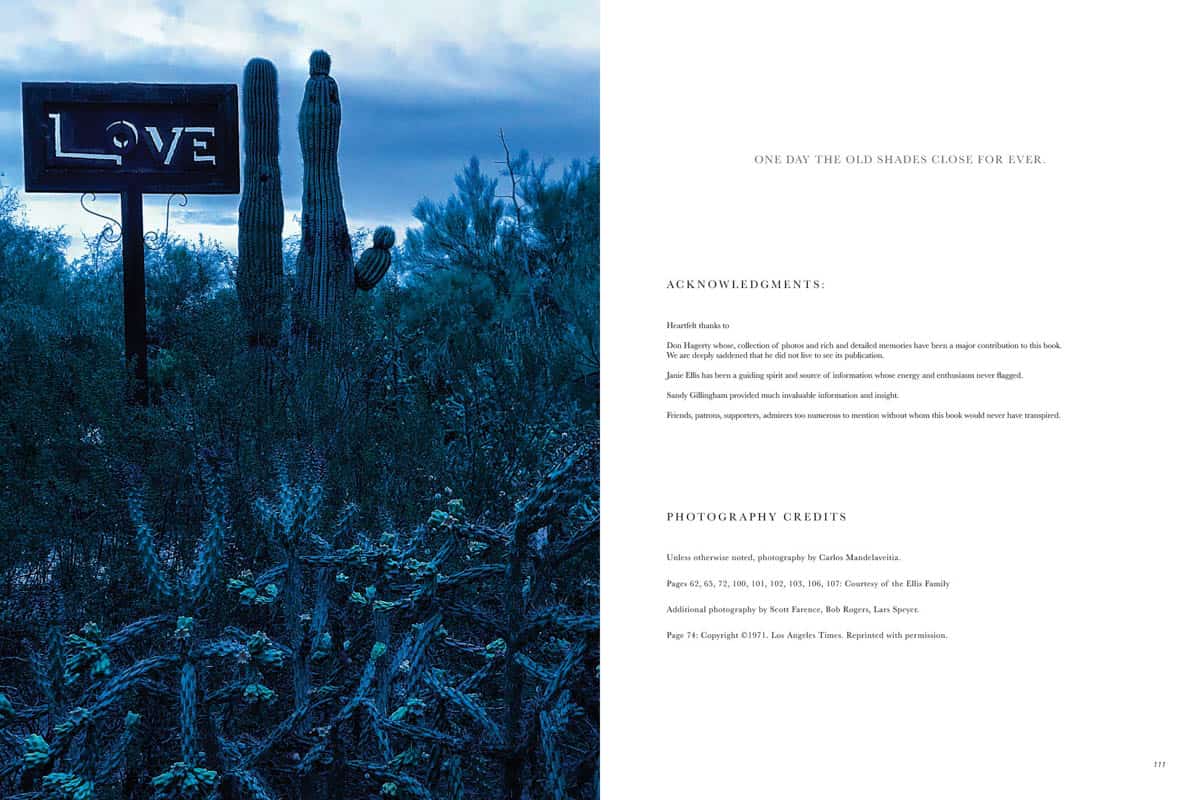 is best known for his extraordinary metal sculptures. In his world, it’s all precarious. Things meant to be useful become ornamental, people are scanty, windblown like dry seedpods whirling in a West wind; boats become fish, an outing to a beach flies off into space, a prisoner on the outside of a prison needs a stamp on his hand to be re-admitted. There’s a wildness, a kookiness, a not-quite-rightness, reversals and ellipses, strange yet somehow familiar flowers and beasts.

Dancers pose on a pair of rusted roller skates, she in a gravity-defying backbend, her hair flying, arms open and flung out as if to receive the sun, the rain, manna from heaven, he in an arabesque, arms angled as if he’s about to carom off, the both of them wildly out of proportion with the skates.

This is Ron’s world, full of hilarity and excitement, strange visions and thrill-seeking sometimes so high-risk as to become ominous.

Ron was a born artist, and in first grade he had a hard time learning to read because he didn’t see the point and, being given paper and pencil, did the obvious thing with it. Drawing. But his true calling was three-dimensional work and in his early years he made small structures from driftwood, stone, sticks, and fanciful wheeled contraptions made from old wheelbarrows, scavenged bicycle parts, baling wire, rusted barrel hoops, etc., harbingers of his mature work.

He grew up in southern California in Palos Verde on the beautiful Palos Verde peninsula which in those days was still a wild open country edged with some of the best surfing beaches in California. He attended Woodbury College and Chouinard Art Institute in Los Angeles, then he headed north in a van which was an ordinary Chevy van greatly altered by him to be a three-in-one: road vehicle, cozy little home, and metal-working shop. After some perambulations hither and yon he settled in Arizona and lived for many years at 105 Cattle Track in Scottsdale which today is Cattle Track Compound, a lively arts center that hosts performances, workshops, meetings, gallery exhibits and has artists of various disciplines residing and working there.

“It ain’t me, it’s them,” he liked to say, neatly encapsulating how far he was from anything ordinary or usual. Accordingly he went his own way and did his own thing; and garnered many accolades. His sculptures are wildly inventive, and a provocative mixture of solid hunks of metal and a welter of fine lines that have a lacy insubstantial quality embodying one of his favorite sayings: “Everything is everything else.”

When she is not writing she is working in her organic garden or playing tennis. Additionally, she creates with fabric, dyeing organic cotton cloth using all-natural dyes which she then makes into quilts, and wearable art.

She lives in the country near Healdsburg, California.